Oh Gosh where to start? I guess if you are reading this then you too will be worried about having bladder cancer or will have it. I’ll start at the beginning….

I have suffered with UTIs since my son, Ashleigh 24, was born, over the years I became used to seeing blood in my urine, it usually meant a trip to the Doctors with a bottle of pee, and coming out armed with antibiotics. every now and again I would be sent to hospital for tests: a cystoscopy – this is where they inset a camera into your bladder and have a good look around, mine always looked like the bottom of the ocean, dark and bits floating by.

In August 2015, I noticed blood after I had pooped, this happened every now and then, and to be honest I wasn’t too worried. By the October I began to realise that something wasn’t quite right, so I took myself to my GPs, I know it sounds grotty, but I had started to photograph the toilet every time it happened, that way I could keep an eye on it and show it to the Doctor.

The Doctor suggested I have a colonoscopy, which is where they insert a camera  into your bowel and have a look around, you are sedated for most of it. Mine came back normal, there was nothing to worry about, and yet it still continued happening. I know now that the bleeding was due to when I pooped, the poop pressed against the tumour causing it to bleed.

By the time December came about, I was exhausted, more than exhausted, by the time the afternoon came round I had started to slur my words and I couldn’t wait until 7pm and would take myself to bed, as well as napping at every given opportunity. I took myself back to my GP and was told I had yet another infection, more antibiotics!

January flew by, and I was beyond exhausted, I took another sample to my GP with a note attached to it, saying that I was worried that this wasn’t a normal infection, by this time my urine was a deep red. Constant to and fro-ing to the GPs and by the time they prescribed my 5th lots of antibiotics, I sort of knew something else was wrong, although never in a million years did I thing it was cancer, I thought it could be kidneys stones again as I had suffered with them in 2014, unfortunately for me, I ended up with sepsis and double pneumonia, wasn’t the best time of my life.

We saw a first year GP instead of my usual one who immediately referred me for an Ultrasound, just like the ones you have when you are pregnant.  Even then I hadn’t grasped the seriousness of the situation. As we left the scan room the radiographer asked me when I was next seeing my Doctor, which I thought was a little odd as they normally say your Doctor will be in touch with you.

I was referred to a urologist who booked me in for another cystoscopy,  I wasn’t nervous, I was totally oblivious to the fact that my world was going to change so dramatically.

April Fools day, 2016. The first clue that something was badly wrong was when the Urology Nurse put her hands on my shoulder and said “oh you are so young to have this”. The camera was inserted, its not painful, and there was this big, red, scaly thing on the screen. My mind was racing, what on earth was it? I was helped off the table and started to dress, I just couldn’t take anything in, when a Consultant came over and said the dreaded words “you do realise its most likely cancer?”

My heart was pounding, my head couldn’t make sense of what he was saying to me, I stood nodding at him and in my head I was screaming, screaming for my husband, he will make this all ok, he will sort it all out. I got dressed and went and sat in the waiting room, a nurse asked if I would like a cup of tea, all I wanted was Tim. I asked if they could get him and was told that I would be discharged soon so there was no need, and a second later she came over and said they were getting him.

Tim walked in and all I could do was to blurt out, “they have found a tumour” he went grey, we were ushered into a room where we were told that actually this was the “best cancer to have” because if it returns they will just “scoop it out”. We tried to stay calm after all the Nurse wasn’t worried. Incidentally bladder cancer costs the NHS the most money out of all the cancers due to its high reocurrence rate, it is the 5th highest cancer within the western world and yet it is the least spoken about.

Over the next few weeks, my life was biopsies, scans, hospital appointments, we learnt that not only did I have Bladder Cancer, I had a rare Neuroendocrine Small Cell tumour and by the time it had been found it had already read to my lymph nodes (these carry the cancer cells around the body), my liver, my hip and arms bones.  My prognosis was grim, I was/am considered to be terminal.

So many thoughts go through your head, am I going to die? Will the treatments hurt me? will I ever be able to go to the beach again? who will look after my son and husband when I am gone? I remember waking up one night at 3am in floods of tears because I wanted to spend the summer sitting in the garden, my husband reminded me that I hate sitting in the sun in the garden, but that wasn’t the point, the point was there was so much that I hadn’t done in my life, I always thought that there would be more time.

I felt cheated, cheated and robbed of my old age, cheated of years of memories to come, will I ever see my Son married? Will I ever see Grandchildren? What about all our plans for the future? We were going to go on a cruise…

I have had two lots of six sessions of palliative chemo, its not nice, it makes you tired, its extreme exhaustion, the good news is that the anti sickness meds work well. Its tough, I lost my hair, losing my hair was better than the alternative, I looked like a boiled egg. I also had palliative radiotherapy, the journey to the hospital was longer that the radiotherapy session itself.

When you are diagnosed with any type of cancer, the first thing people say to you is to “stay positive” oh how I hate those words, even though I know that a positive mental attitude has been shown that it helps to boost your immune system. The pressure to be happy all the time is unreal. the pressure to be strong and brave, to suck it up, well let me tell you something right here and right now.  You don’t have to be brave, all the time, you don’t have to be strong, all the time, its is ok to be not ok! Please remember that, there is enough pressure on you without trying to hold it all together for everyone else.

After the cystoscopy, I started a Facebook page “ My Big Fat British Bladder Tumour”, I found it therapeutic to get all the thoughts out of my head and onto paper and to try to make sense of them. I really recommend it, even if you just keep a personal diary, its such a rollercoaster ride this journey, one minute you could be in Tesco shopping and smiling, the next sobbing you’re heart out.

In August 2017, I made the decision to have my bladder removed. I was in pain from ulcerations that weren’t healing in my bladder, because of this my quality of life was impaired, it wasn’t an easy decision although 8 months on, it was the best one I have ever made and I can now pee standing up! 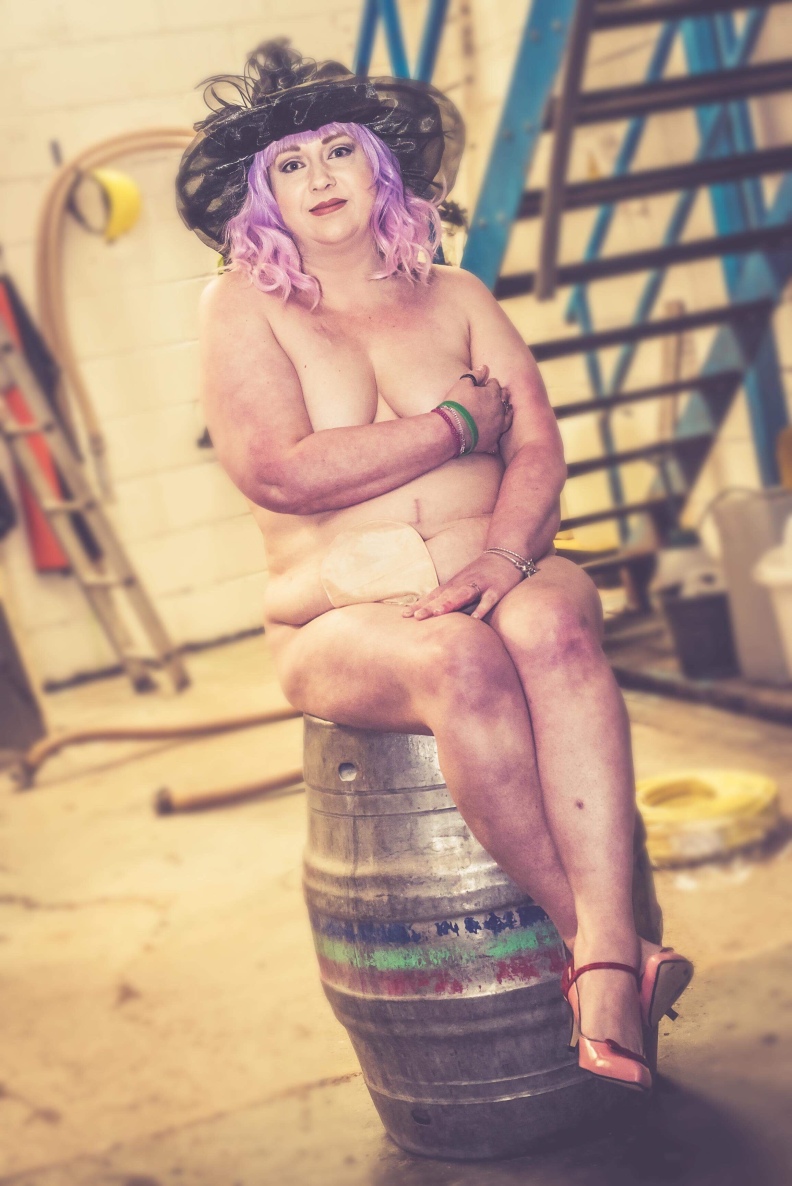 I reached out to my local Macmillan, I have my lovely Nurse Jill and counsellor Jane, its good to talk to others, and knowing that whatever you say wont affect them like it would a family member.  Both Ashleigh and Tim have had counselling through Macmillan, it has helped bring our family closer.

You have to take each day as it comes, some months will be filled with treatments and scans and some will be empty. It is so important to find time for yourself, go for a little walk, we got a dog for company for me and this way I have to make the effort to go out.

Let people help you when they offer, you will get tired, you will have days when it feels like you will never leave your home again, but you will, trust me, you will.  When the days were long and difficult a friend of mine gave me some advice…. whenever you feel that you cant go on, just remember “that this will pass” and it beats the alternative….

Meditating has helped calm the storm inside me as well, and some days I just watch the cheesy love films on the tv, whatever you do, don’t feel guilty, we cant all live life to the fullest every second of the day.

Two years on, I’m still here, still alive, grateful for each new day, and humbled by the support people have shown me. I have other health issues now, some  to do with the cancer and some not, if life has taught me anything it is that, as the saying goes “life is too short’  and although receiving a cancer diagnosis was the worse thing I could of ever imagined, I have come through the other side, we are now just waiting for it to return, we have a plan for that time too! that makes me feel prepared.

For now, we are making family memories, doing as much together as we can, I’m also making memory boxes for my Husband, Son and close friends, in a way I’m lucky as I get to tell them all how much I love and adore them, with  few surprises in those boxes.

-Ongoing UTIs that don’t clear up with antibiotics

Please, please if you suspect that something is wrong then make an appointment with your GP, and keeping back until you get the answers.

Anita was diagnosed with Small Cell Bladder cancer at 46, she lives with her husband Tim, her son Ashleigh and their fur babies, Sherlock the dog, Barney the bunny, Ollie, Fuggers and Moma Cat the cats and Bob the fish. (we don't talk about Bob). They all live in Hampshire, after being diagnosed Anita started a Facebook page detailing her journey with cancer called “My Big Fat British Bladder Tumour” View all posts by Anita Brown